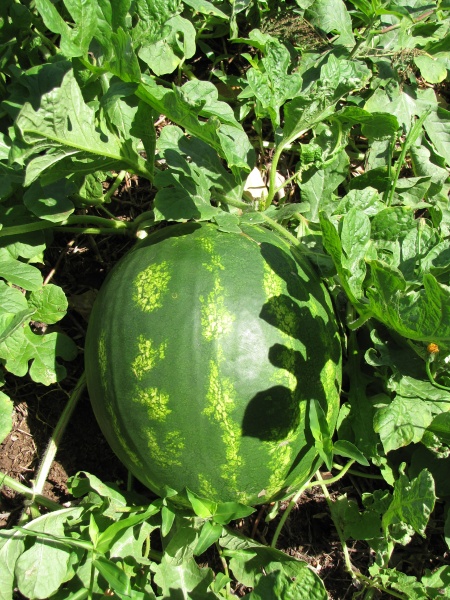 The watermelon (Citrullus lanatus) belongs to the family Cucurbitacea. It is a vine-like flowering plant which grows and matures within a year. It is a special type of berry which is referred to as pepo. Its leaves are coarse, hairy and pinnately-lobed and white to yellow flowers. It possesses long, weak, trailing or climbing stems which are five-angled and up to 3 m (10 ft.) long. Young growth is densely woolly with yellowish-brown hairs which disappear as the plant ages. It is grown for its edible fruit known as watermelon, which has a smooth hard rind usually green and a juicy, sweet interior flesh, usually deep red to pink, but sometimes orange, yellow, or white, with many seeds. The watermelon grows on vines with large crinkled leaves.

Watermelon is relished by a large number of people across the country and even the world as a whole as a fresh fruit. This is because watermelon is thirst-quenching and is known to be low in calories but highly nutritious therefore, recommended for people that wish to lose weight; and with the high rate of overweight or obesity related issues its demand has sky rocketed. It is a good source of vitamins such as vitamins A and C in form of disease fighting beta-carotene. Potassium is also available in it which is believed to help in the control of blood pressure and prevents stroke and other numerous health benefits watermelon offers to the body. They grow rampantly once established without too much attention.

Watermelon is thought to have originated from Southern Africa, although it was found growing wild in American continent in 1854. It is indigenous to the tropical Africa and has all its genetic diversities present there from the sweet ones to the bitter ones and bland forms. European colonist and African slaves introduced watermelon to the new world. Spanish settlers were growing it in Florida in 1576.  Now watermelon is cultivated in India and china; with China being  the world’s single largest  producer of watermelon.

Watermelon grows anywhere and everywhere in Nigeria, north, east, south and west. And we've successfully grown these fruits in these areas. Even if it's at your backyard, it'll grow as well.

Potential yield of the crop

10,000 seeds can be planted on one hectare of land. Each seed will produce 2 fruits. Therefore, a yield of 20,000 fruits is expected, all things being equal.

Once the watermelon plants have three or four leaves, some weeds may also have started to grow. Shallow hoeing and an application of a post-emergence herbicide such as sethoxydim or clethodim may control the weeds.

Fertilizer can be applied when the vine begins to spread or when the flower begins to blossom and the fruits begin to set this will ensure that the plants are getting the energy they need to produce high quality fruits. A granular fertilizer of NPK 10:10:10 or 5:5:5 can be used to fertilize the soil. The appropriate dosage of the fertilizer should be applied to the base of the plant, well distributed and watered. It should not touch the plant to avoid the plant being burnt.

Estimated Cost including VAT and Admin: 262,000