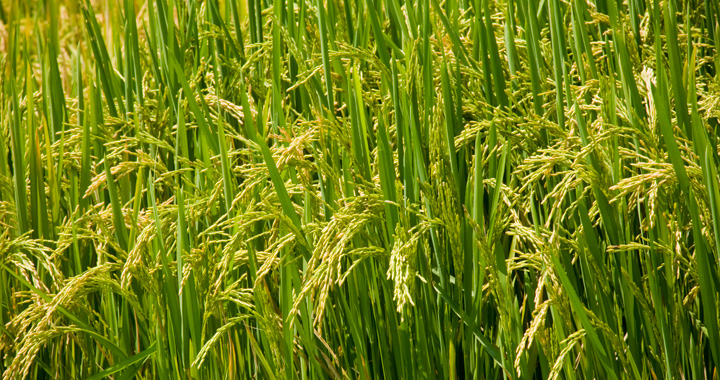 Rice (ORYZA SATIVA) is an important food crop in Nigeria; it is one of the major staples and a strategic commodity to Nigeria economy. Demand for rice has been increasing at a faster rate in Nigeria than in most part of Africa with about 24.5 kg per capital consumption per year. Since 2002 Nigeria has been importing an average of about 2 million metric tonnes of rice per annum and spending between $500 million and $1 Billion on rice importation.

Rice self-sufficiency is a major food policy focus of Nigeria. To achieve these would require a significant change in the level of production and processing of rice in the country. The ecologies being exploited to increase rice production in Nigeria were lowland, upland and irrigated land. The most common and accessible among these is the upland rice production system although it is characterized by low productivity.

Nigeria is by far West Africa's largest rice producer. The rice producing areas can be subdivided into the Rain fed upland (30%), The Rain fed lowlands AKA "Fadama (47%), Irrigated (17%), and Deep water floating production (5%). The main areas of rice cultivation in the country include the middle belt and Northern states of Benue, Borno, Kaduna, Kano, Niger and Taraba, as well as the South Eastern states of Enugu, Cross River and Ebonyi. Kaduna is the main producing state, followed by Niger, Benue, Ebonyi, Taraba, Kano and Borno The latter seven states account for over 67 percent of total rice production in the country.

Currently, the average rice yield nationwide stands at about three tonnes per hectare, which is far lower than the international average of six tonnes per hectare. This is attributed to low hybrid seed uptake amongst the smallholder farmers.

How many tonnes can a local rice farmer harvest per hectare in the country?

Rice production is not only a Nigerian issue but a global issue that is why now players are coming in from right, left and centre into rice value chain because rice is now a global food. What farmers realised in their farms as per total yield is ecology dependent. We know that our farmers yield capacity is very low due to some certain reasons. Under the upland condition, I think the yield is still at .7 to 1 tonne per hectare. If you come down to the rain fed low land is at the region of 2 to 2.5 per hectare. It is probably when you move to irrigated areas that you will find farmers that are getting 3 to 4 tonnes per hectare. Generally, the yield is still very low and the reasons are obvious. Some farmers in the upland and rain fed lowland are not using improved varieties for one reason or the other, either they are not being exposed to them or they are attached to the one they have been using traditionally and they will give one reason or the other on why they don’t want to part with such particular variety for reasons best known to themselves. Two, their input used level is very low. In fact, most farmers don’t apply fertiliser while those that do, apply very little to their crops. Rice is a heavy feeder like agronomist will tell you. It requires a lot of input.

Our environment has already been over used. We don’t have irrigation facilities, good water supply and sometime draught reduces yield under rain fed condition to very critically low condition, sometimes some harvest virtually nothing. With such kind of low yield, definitely, national rice production average will come down very low. These are some of the reasons why farmers are not realising their full potentials.

Extension services to our farmers are also low. We need to put more extension workers so that the technology will get to the farmers easily. Agronomy, fertiliser management issues need to be brought to the door steps of the farmers. These are some of the reasons. Here in the Institute we recommended 20 by 20cm plant spacing but if you go to some farms you will get one meter by 20 cm. This is almost one third of the field being utilised and the remaining two third is not utilised. Such farmer cannot obtain optimum yield.

Brand Names, Quantity and stage of usage of each input

The amount of fertilizer to apply depends on the quantities and level of residual nutrients in the soil and the type of fertilizer materials available. It is advisable to apply fertilizer doses based on soil test results and expected yield. Studies by PROSAB and collaborators have found that soils in Borno State are deficient in key nutrients for rice production. The following recommendations for lowland rice are similar to those recommended for irrigated rice schemes and swampy areas where there is proper water control and distribution. It is essential that the water level on the field at the time of fertilizer application is maintained at 3–5 cm to ensure efficient use of the applied fertilizer. If the water on the field is more than 10 cm, it will cause a loss of nitrogen fertilizer through volatilization, therefore, drain the field before fertilizer application.

Upland rice responds well to nitrogen fertilization. Application of 60–80 kg/ha of nitrogen and 30 kg/ha each of phosphorus and potassium (50–30–30) is recommended. This is about 4 bags of NPK 15:15:15 applied at sowing. Incorporate (bury) the fertilizer in the soil properly to avoid losses. The second dose of about 2 to 3 bags of urea fertilizer should be applied at 6–7 weeks after sowing. Where land that has been under one- to two-year fallow is cropped with rice, apply a moderate rate of N (60 kg/ ha) and on older soils, apply a higher rate (80 kg/ha). Top dressing of N fertilizer should be applied between the rows and buried. The P and K fertilizers may be applied by broadcasting before sowing if applied separately

Rice straw, husk/bran should not be wasted but used as organic manure, especially for sandy soils. Heap the straw after harvesting and water regularly if possible (see tips for making compost below). The straw will decompose and form useful manure. Apply the decomposed straw to the field at the rate of 500 kg/ha and mix thoroughly with the soil. Undecomposed straw can also be used. Spread the straw on the field and flood thoroughly. After about 30 days, mix the soil and the straw and spread out on the field while applying fertilizers. Where organic manure has been used, the recommended rate of fertilizers should also be applied unless soil test results show that the soil has adequate nutrients, in which case the rate to be applied should be adjusted such that enough nutrients are available to the rice crop. The application of straw will, however, improve the water and nutrient retaining capacity of the soil thus raising yields, especially on sandy soils.

A number of methods can be combined to control weeds in rice. Examples of such methods are fallowing, land preparation, use of a competitive rice variety, water control, hand weeding, and herbicides.

Apply 14–21 days in paddy after transplanting

Apply 14–21 days after seeding or transplanting

Apply 14–21 days after seeding or transplanting

Apply within the first three days of planting (for direct seeded)

Apply within the first three days of planting (for direct seeded)

It is important to note that special skills are required in handling and using herbicides to ensure effectiveness and to avoid poisoning the user. Read and follow the instructions on the product label before using any herbicide. Non-selective herbicides, such as glyphosate, are sometimes used during land preparation to reduce the problem of perennial weeds, such as Cyperus spp. and Oryza longistaminata, which are difficult to control with selective herbicides.

Chemical control measures should be implemented when about 20% of the field is infested.

Bird attacks are serious problems in rice production. Some varieties may have resistance to bird damage. Engagement of bird scarers is commonly adopted. Planting rice too early or late exposes the crop to severe bird damage hence planting should be properly timed.

This is caused by the fungus, Helminthosporium oryzae. This disease is widespread on rice in many northern States. However, the intensity of the disease varies from one locality to another and from year to year. The disease is seed-borne and can be transmitted to new crops through infected seeds carried over from infected crop residues of the previous season, alternative crop and weed hosts, and contaminated irrigation water. Unlike blast, brown leaf spot is more severe on older plants than on seedlings. The disease is characterized by dark brown oval spots (about 3.8 cm long) on the leaves. The large spots usually have lighter colored centers and dark brown margins. The spots on the glumes are dark brown and in some cases the entire glume may be covered with a velvety black mass of spores. Late in the season, the fungus attacks the basal node of the rachis, producing a blast which can be distinguished from that caused by Pyricularia by the color and velvet appearance.

Seed plus, Dress Force, Apron Star or Super Homai at the rate of 10g/5 kg seed before sowing. When symptoms are observed, spray Diethane M45 (Mancozeb) weekly at the rate of 1.5 kg/ha (this is about 2–3 small matchboxes full per 15-L sprayer) for 3 weeks.

Blast disease is caused by the fungus, Pyricularia oryzae. It is very prevalent in lowland rice. It damages plants especially during the seedling stage. It appears as neck rot and panicle blast after flowering. The disease appears first on the seedling leaves as minute brown specks which then enlarge to become spindle shaped, pointed at both ends. The center is greenish-grey often with a water soaked appearance. This later dries and changes to straw color with a brown margin. Under very damp conditions, several spots may conglomerate and the whole leaf then withers.

Apply Mancozeb or Diethane M45 or Benomyl at I–1.5 kg/ha when the sign of disease are observed. Repeat application weekly for 2 weeks.

Striga is increasingly becoming a serious problem in rice production in Borno State where Striga hermonthica also attacks maize and sorghum. This weed is a parasite which germinates only when the plants (hosts) which it attacks are present. Striga is common in soils that have been used continuously and are poor in nutrients. The symptoms of Striga damage on the host crop can be seen before the parasite emerges from the soil. Usually, the symptoms are similar to those on drought affected crops and include stunted growth, wilting, yellowing and scorching of the leaves, lower yield and plant death in severe attacks. Striga produces numerous tiny seeds which make it easy for the parasite to spread from place to place.

Some of the measures recommended for the control of Striga in rice include the use of Striga-free seeds, proper cleaning of farm tools especially after working on infested fields, proper fertilization (use of organic manure and inorganic fertilizer), crop rotation especially with soybean and groundnut, and intercropping as well as timely weeding. Rice farms should be weeded before Striga produces seeds to reduce the Striga seeds in the soil. A combination of the control measures often referred to as the integrated Striga control approach is recommended and is more effective than the individual control measures.

Other pesticides include: Furadan, and Karate (for gall midge)