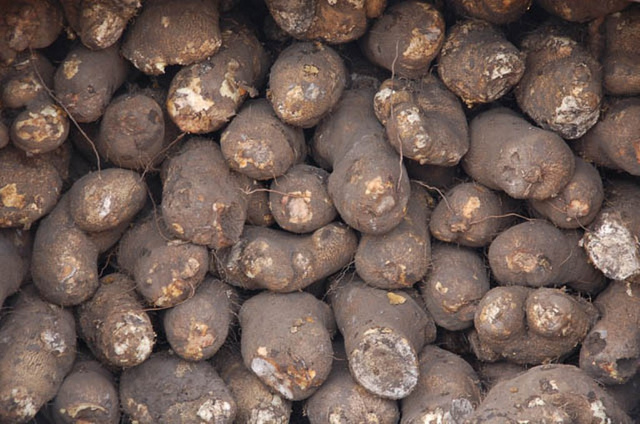 Yams are starchy staples in the form of large tubers produced by annual and perennial vines grown in Africa, the Americas, the Caribbean, South Pacific and Asia. There are hundreds of wild and domesticated Dioscorea species. White Guinea yam, D. rotundata, is the most important species especially in the dominant yam production zone in West and Central Africa. It is indigenous to West Africa, as is the Yellow yam, D. cayenensis. Water yam, D. alata, the second most cultivated species, originated from Asia and is the most widely distributed species in the world.

Nigeria is by far the world’s largest producer of yams, accounting for over 70–76 percent of the world production. According to the Food and Agricultural Organization report, in 1985, Nigeria produced 18.3 million tonnes of yam from 1.5 million hectares, representing 73.8 percent of total yam production in Africa. According to 2008 figures, yam production in Nigeria has nearly doubled since 1985, with Nigeria producing 35.017 million metric tonnes with value equivalent of US$5.654 billionThe major yam producing states in Nigeria are: Adamawa, Benue, Cross River, Delta, Edo, Ekiti, Imo, Kaduna, Kwara, Ogun, Ondo, Osun, Oyo, and Plateau. Benue state is however the largest producer

Brand Names, Quantity and stage of usage of each input

A hectare of water yam is able to remove about 128 kg nitrogen, 17 kg phosphorous and 162 kg potassium from the soil. This represents more or less its fertilizer requirements. In the case of white yam, no information is available regarding the amount of nutrients it can remove from the soil. However, like other yams, its fertilizer requirements should be similar to that of water yam.

The level of soil fertility in the field and the amount of fertilizer that need to be added can be determined by submitting the soil samples to the any agricultural institute or to IITA for analysis. The assistance of the local Farm Management Technician should be sought regarding this.

Application of compost. Yams respond well to organic fertilizers like compost – a mixture of decayed organic matter composed of plant parts and animal manures. The compost is mixed with the soil while the field is being prepared or it is placed just below the spot where setts are to be planted.